Karachi is a gift for writers. This city is brimming with detail and eccentricity. There is so much texture, so much for curious eyes to take apart. It is grimy, dirty, gritty, and resilient. It’s loud and obnoxious. It’s obnoxiousness is also perhaps the cause of its resilience.

It is morning and we are on our way to a majlis in Soldier Bazaar. The school traffic blocks the roads. Children in neatly pressed uniforms making their way to school by the busloads – in school vans, chauffeured cars, rickshaws, siblings crammed on a single motorcycle with a sleepy father at the front, school boys on motorcycles driving themselves to school.

There is a lack of traffic lights and many of the streets are narrow (further narrowed by the piles of trash on the roadsides threatening to take over the city). Vans, buses, cars, rickshaws and trucks become stuck at intersections. An uncle from the nearby chai shop walks over and begins guiding the traffic at the intersection we’re stuck at. This is always a pleasant surprise. Karachi can be violent and dangerous, but you’re always being watched and observed by passersby. People don’t mind their own business, which can be very frustrating, but there are times this comes in handy. If you’re struggling to manoeuvre your car, someone will notice and they’ll begin signalling and guiding you with hand motions and bangs on your car.

Every morning at the intersection near my house there will be a massive traffic jam, seemingly incapable of being resolved because of the numerous directions in which the endless streams of vehicles are coming and going. And every morning the traffic jam will be resolved somehow, unofficially, by a different person, jumping out of their car or popping out of their shop to direct the traffic.

In Sadar – downtown – I come a cross a traffic officer shouting directions through a loud speaker. Dressed in a clean white uniform and a black bullet-proof vest, he’s an aging pot-bellied uncle, clearly frustrated by his impossible job of controlling Downtown Karachi’s traffic. He takes turn wiping sweat off his brows, waving his arms around, and barking into the loudspeaker. One driver ignores his directions and takes a turn where he isn’t supposed to. The traffic officer swears at him on the loud speaker, clearly heard across the busy intersection: “Kumbakhat! [Imbecile!] Everyday you turn here, and everyday I yell at you not to turn here!”

We come across a school. A guard with a pistol in his hand stands outside the door of the school as children stream in. Inside, another guard with a kalashnikov slung across his chest, ushers the school children through.

At the mall there is heavy security. You must walk through a metal detecter. Your bags are checked. Everyone is checked. It’s a busy mall. The atmosphere is relaxed. But for me, metal detectors remind me of airports, of Brown and Muslim anxiety, of racial profiling, so I tense up, ready to reveal my innocence should the detector go off. But everyone looks like me and everyone is relaxed and it goes off for everyone and everyone’s bags are checked.

At the hospital, I am visiting my cousin. The entrance has a metal detector, a cheap plastic looking thing that is clearly not working. A guard with an AK-47 half-heartedly looks on for signs of danger and full-heartedly leers at women.

In the evening, on the streets of Ancholi, there are police trucks and rangers set up. Roads are blocked off, so we part our walk through the narrow streets for the evening majalises. Rangers and guards loiter around the streets, with kalashnikovs and pistols. Some in dark-blue police uniforms, others in camouflage army gear. One of the young male rangers learns toward a stall, checks out some noha CDs as his gun slings forward, hanging from his shoulder. Another sits on the back of an open truck, his legs stretched out before him, his fingers holding on to the trigger.

How the streets of my childhood memories have come militarized. A truck full of mental detectors passes by. Across the metal detectors is written DONATED BY EDHI CENTRE. And that’s when it really hits me fully: we are in the midst of a war. A decades long war. This war has been going on for so long that the militarization has become shockingly normalized. The Edhi Centre, normally known for its orphanages, shelters, and ambulance service, in an attempt prevent the loss of lives, is donating metal detectors. Guns and metal detectors are a constant reminder of danger.

As a Shia in black during Muharram, walking the streets, I thought I would be more afraid. But here, on the streets of Ancholi, a Shia locality, I am reminded of the streets of modern day Karbala, Iraq. There are vendors selling Muharram related wares, talismans and alams, noha CDs. The imambarghas are built to look like the shrines of Imam Hussain or Hazrat Abbas. There are sabeels set up giving out sharbat and refreshing drinks. Multiple majalises going on at the same time can heard from the loudspeakers on the streets. People opening their windows and doors to listen. People sitting on their porch steps and balconies, head bowed, shoulders shaking, openly weeping when the tragedy of Hussain and his family in Karbala is being narrated. Men and women, children and seniors, sitting on the streets, in their shops, in the imambarghas, listening from parked cars, crying, loudly.

And yet there isn’t a sense of fear, or at least not to the extent that I expected. This is everyday. Life goes on. Maybe something will happen, but probably it won’t, and that’s what it’s like everyday, so why be afraid?

Karachi is booming to the point of bursting. It is open for business and unable to control its own greed and urges. If you see an opening in traffic, you rush in and speed through because you might miss your chance. There’s no “you first” on the roads here.

Karachi is aware of itself but helpless at controlling its exponential growth. Its arteries are clogging up. The trash piles on, the roads get narrower, the traffic increases but keeps pushing through even when it can’t, even when there isn’t enough space. People keep adding levels and floors to their homes without permits.  Somehow, and not always, the city adjusts. It just keeps going. But for how long? 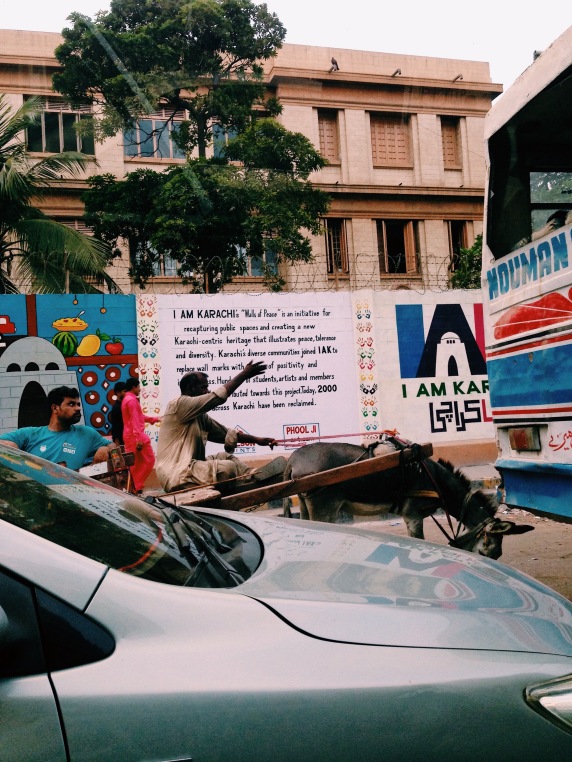 As a Muslim and as a Shia I often feel as if I live in an environment where I have to keep quiet about my faith and spirituality. Within Muslim circles, talking about being Shia is looked upon as inciting sectarianism and division and has lead to the further marginalization of Shia Muslims. In larger, secular circles, the mere mention of faith is seen as backwards and as a sign of intellectual inferiority. I’m tired of both kinds of silencing. Especially in a climate of islamophobia and anti-Shiism, I feel it’s crucial that I am vocal about my identity and refuse the pressure to be ‘acceptable’ by staying silent.

There’s a colonial history of coloured peoples made to feel as if they are lesser because of the beliefs and practices they hold – that they are backwards, uncultured, uncivilized, or in the words of our current prime minister “barbaric”. Being a student in Eurocentric academia, I am faced with a general assumption that spirituality has been “debunked” and those who continue to have faith (no matter what culture they’re from) are behind the times – that we should all think like the White Man now thinks.

This is a legacy of colonialism and empire. There are countless examples of this: from the way indigenous communities on Turtle Island were banned from practicing the potlatch, to the greasing of the gun powder cartridges used by Muslim and Hindu sepoys in the British army with pig and cow fat (which incited India’s First War of Independence in 1857), to the banning of headscarves and niqabs in France, and to the extremely racist and islamophobic rhetoric of New Atheists like Bill Maher and Richard Dawkins who continue to paint Muslims as “savages” in direct opposition to “liberal values”. Our beliefs and practices are seen as ignorant and irrational.

As a Shia, I have also often faced many misconceptions and judgements at the hands of fellow non-Shia Muslims. There is also a long history of anti-Shiism backed by ‘Muslim’ states. Many of these anti-Shia states are also closely allied to Western imperialism. Saudi Arabia, the gulf countries, Pakistan (my own country of birth), are places where Shia mosques, Shia professionals, and Shia communities are targets of severe violence.

Simply saying “Yes, I am Muslim. Yes, I am Shia. Yes, I believe in a prophet, his family, and a holy book” feels like an act of defiance and resistance.

Right now it is Muharram, one of the most important months for Shia Muslims. My community goes in to mourning. We wear black. We remember the legacy of Muhammad’s family – most of whom were starved and killed after his death in the plains of Karbala for refusing to pay allegiance to the tyrant leader, Yazid. Many of us identify with these stories, the characters of these stories, the messages of resistance, resilience, of social justice and resisting tyranny and oppression.

Zainab, the granddaughter of the Prophet and the matriarch of the family, had her veil and the veils of all the women in her family physically ripped from them the same night that almost all the men and boys in her family were brutally massacred. Zainab, along with the prophet’s great grandson and the remaining women and children were then dragged in chains through the streets of Kufa, whipped, taunted, and humiliated. Yet she rose resilient, refused to be humiliated into silence, and spoke with such strong words that she shook the very foundation of Yazid’s empire, which eventually led to his downfall. I have learned of this story from childhood. Every Muharram, I hear it again.

At a time when bigots would love to see me humiliated by forcibly removing my headscarf, I identify with Zainab’s story and it gives me strength to know that my history has examples of resilient woman who stood up for themselves, who spoke against oppression at the hands of tyrannical men, who lead revolutions and created social change.

I don’t need white liberal feminism. I have my own stories. I have matriarchs in my bloodline. And I will tell these stories and continue to hold fast to them, even if they make white liberalism uncomfortable.